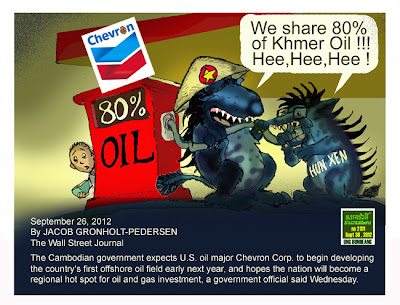 Cambodia of HUN SEN is under V T power ,so is normal that V T will have more benefit than Cambodia .So vote for Opposition Party ,and get freedom and real democracy for New Cambodia.

Sacrava has passed away.
Look up his name

There is a saying: Relax, you longer. Apparently Ung Bun Heang (the cartoonist) did not relax and died at age 61. Good riddance!

It would be a torture for him to live and watch his country and people keep getting owned.

Frankly speaking, the Vietnamese is superior over the Khmer and will always have much more money to buy out Cambodia. Khmer will be kicked around by other Khmer who sold land, oil, concession to Vietnam.

P.S. It is very wrong to draw a picture falsely accusing Vietnam's taking oil from Cambodia. The oil has not even drilled yet.

Khmer race has been creamed by the Thais over hundreds of years. Smart and brave Khmer died in battles or got captured. What's left were the coward, dumb Khmers survivors we have today. Khmer students have the lowest learning aptitude in the world, so low, far below any other race.

As of 2018, Khmer race still rank near the bottom in the International Math Olympiad. Look for the ticker KHM.

In the last four years, Cambodia ranks so low. Even a country like Cuba who had only one student in their 2017 team could out perform all five Khmer students' combined score.

Let's look at year 2017 more closely, there were only 110 countries and territories competing and Cambodia ranked 105th!!! So low especially compared to its neighbor, Vietnam who ranked THIRD!

This year, 2018 Cambodia improved their rank to 97 but wait, not so fast. That's because there were fewer competitors. LOL...

If I were Mr. Hun Sen, I would wait out to win the current bet against Sam Rainsy [to show Sam Rainsy a coward again refusing to honor the bet, refusing to come back to Cambodia].

Then I [as Mr. Hun Sen] would find Kem Sokha innocent, ask the King to give him yet another pardon, reinstate CNRP with Kem Sokha as the legit president.

Watch the vicious fights between Kem Sokha's and Sam Rainsy's factions. Sam Rainsy will try to hold on to their illegal seize of power by accusing Kem Sokha to be the traitor [held in the pocket by Mr. Hun Sen], while Kem Sokha will accuse Sam Rainsy as a liar, illegally portray others as strawmen to attack, to seize power.

Sam Rainsy was pro-China to get support in contesting against Vietnam for Koh Tral, the sea around Koh Tral and also Khmer Krom. Clever Hun Cent stole the idea and became pro-China to get aids, loans, money from China and left nothing for Sam Rainsy.

China did not want to work with Sam Rainsy and CNRP because Kem Sokha was pro-USA. So now, Sam Rainsy got no support from either China nor USA. That's the perfect example of a snake with two heads playing tug of war in the foreign policy.

Not even Japan wanted to talk to CNRP because they don't know which snake are they dealing with. Such a poisonous culture in CNRP. No thing good will come from CNRP until one snake head is chopped off.

The Cambodians will continue to suffer when the stupid leaders keep playing games with each other. 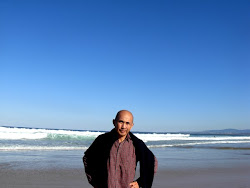